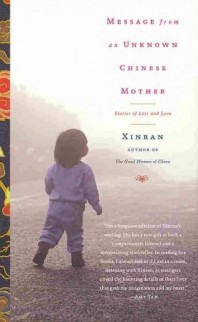 Message from an Unknown Chinese Mother is made up of the stories of Chinese mothers whose daughters have been wrenched from them, and also brings us the voices of some adoptive mothers from different parts of the world. These are stories which Xinran could not bring herself to tell previously - because they were too painful and close to home. In the footsteps of Xinran's Good Women of China, this is personal, immediate, full of harrowing, tragic detail but also uplifting, tender moments.

Ten chapters, ten women and many stories of heartbreak, including her own: Xinran once again takes us right into the lives of Chinese women - students, successful business women, midwives, peasants, all with memories which have stained their lives. Whether as a consequence of the single-child policy, destructive age-old traditions or hideous economic necessity... these women had to give up their daughters for adoption, others were forced to abandon them - on city streets, outside hospitals, orphanages or on station platforms - and others even had to watch their baby daughters being taken away at birth, and drowned. Here are the 'extra-birth guerrillas' who travel the roads and the railways, evading the system, trying to hold onto more than one baby; naive young student girls who have made life-wrecking mistakes; the 'pebble mother' on the banks of the Yangzte still looking into the depths for her stolen daughter; peasant women rejected by their families because they can't produce a male heir; and finally there is Little Snow, the orphaned baby fostered by Xinran but 'confiscated' by the state.

The book sends a heartrending message from their birth mothers to all those Chinese girls who have been adopted overseas (at the end of 2006 there were over 120,000 registered adoptive families for Chinese orphans, almost all girls, in 27 countries), to show them how things really were for their mothers, and to tell them they were loved and will never be forgotten.